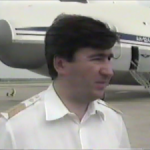 Twenty years ago, people of Shreveport, LA got serious jitters at the sight of a Russian military plane AN-124 coming in for a landing at the nearby Barksdale Airforce Base. Against the stereotypical assumptions, however, this flight did not have any militaristic intentions. Quite the opposite, the large transport plane was coming with the most noble of goals – to load 86 tons of humanitarian aid consisting of food and medical supplies and to deliver the valuable load to Ekaterinburg, Russia.

April of 1992 witnessed several historical moments. This very first memorable landing of the Russian military plan, AN-124 (Ruslan), on the American Airforce Base, Barskdale AFB, was completely unthinkable before that day. Such breakthrough event led to a series of reciprocal visits and exchanges between ex-enemy states in the months to come.

Read more at Life of a Soul.

© 2016 All Rights Reserved | Powered by WordPress | Made with ❤ by Themely